Originally sold for 1 cent each, the “Greetings From Mineral Wells” postcards captured the local tourism experience of the 1930s and 1940s. One side displayed an image of a destination and the other provided a place to brag about your travels. A kind of old-school Instagram in a time when the only mail was snail mail and social media didn’t exist.

German immigrant, Curt Teich printed the iconic “Greetings From” postcards that offered the best views of American travel. The idea came from “Gruss Aus” (“greetings from” in German) postcards, which were popular where he grew up.

Like many other places, we love our version of the postcard here in Mineral Wells. And while many of the attractions depicted on the “Greetings From Mineral Wells” postcard are highly recognizable, some no longer exist. So, we thought it would be fun to explore each of the destinations.

But first, can you identify all the locations on our postcard?

Mineral Wells has two historic and iconic hotels and the Crazy Water Hotel is one of them. In fact, it was built first.

The Crazy Water Hotel is currently under renovation with some BIG plans.

To talk about the History of the Crazy Water Hotel, we must first tell you a bit about the history of our town. Mineral Wells was settled in 1877 by a man named James Alvis Lynch, or “Judge Lynch” as he’s known in these parts. He and his family left Denison, Texas and headed west in search of a climate that might offer relief from malaria. They traveled some 80 miles to a valley nestled in the hills of Palo Pinto.

With the nearest source of water four miles away at the Brazos River, the Lynch family had a well dug on their property. But the water had a funny taste, so they tested it on their cattle first. When there seemed to be no ill effects, they began drinking the water themselves and much to their surprise, Mr. & Mrs. Lynch who both suffered from rheumatism started feeling better.

It didn’t take long for word to get out that they’d found healing water. Soon, everyone was coming to try the curative waters and many began drilling their own wells. 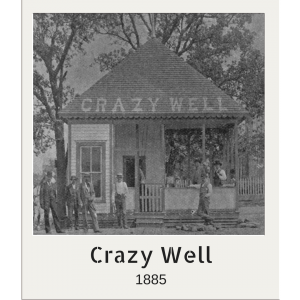 Okay…now for the “Crazy” part

In 1881, it seems a woman with dementia sat by a particular well all day and drank the water. The locals just thought she was crazy and began calling the well “Crazy Woman’s Well”. Even though the woman is reported to have been healed from the crazies, the “Crazy” part of the name stuck and the well was called Crazy Well.

Mineral Wells quickly became known as “the nation’s greatest health resort” and the need for lodging was booming. In 1912, a businessman from Dallas named Carr Collins built the Crazy Water Hotel at the site of the Crazy Well. Unfortunately, in 1925, the original Crazy Water Hotel burned. But Mr. Collins was quick to rebuild and the new hotel, the one seen in the Greetings From Mineral Wells postcard reopened just two years later.

Though you won’t see the name on any maps, this little island still exists on Lake Mineral Wells. It’s situated less than a quarter of a mile from the public boat ramp and swimming area so kiddos love to race to the island and back.

During the time the postcard image was taken, the island was bigger. There was a walkway leading people out to the island where they would picnic and enjoy the day. There are still remnants of some of the structures that were built on the island like a brick barbecue, bench, and picnic table and when the lake is down, you can see the piers from the old walkway.

In 1943, growth in population both in town and on Fort Wolters forced Mineral Wells to raise the dam so they could increase the water supply. Unfortunately, part of the island was covered in water.

You can read more about the history of Lake Mineral Wells and the State Park here.

Though the Baker likely needs no introduction, especially these days, we couldn’t just ignore her in this post.

By 1890, Mineral Wells had become quite famous for healing waters drawing travelers  from all over the nation. Locals decided it was time to cash in on tourism by building a hotel. And not just any hotel, a luxury hotel… 14-stories high, 450 guest rooms, two ballrooms, a bowling alley, a gymnasium, a spa, and an outdoor swimming pool. The Baker offered amenities like air-conditioning, circulating ice water in every room, and lighting and fans that automatically turned on and off as guests entered and left their rooms.

The Baker finally opened in 1929 after some changes to the initial plans halted construction to change the original design. We’ll talk more about that in the “L- Baker Hotel Pool” section. She hosted guests for some 30 plus years until Fort Wolters closed and people started seeking healing from medicine rather than the waters. In 1963, the Baker Hotel was closed. It reopened briefly when a group of local investors tried to make a go of it, in 1972 the Baker closed for the last time.

That’s a brief history, but you can read more about the Baker here.

Now, 90 years after the hotel originally opened, there is promise of another grand reopening. You can follow her magnificent makeover story here.

Curt Teich actually used this postcard image twice in the “Greetings From Mineral Wells” postcard and he was very sneaky about it. 🙂

Just seven miles south of Mineral Wells is an incredible vista offering and outstanding panoramic view of the Brazos River. In fact, it has been dubbed “one of the most beautiful scenic views in Texas.” Though the property is now closed to the public, it was once a very popular scenic spot for travelers.

As the story goes, Inspiration Point got its name from Billy Sunday, an internationally known evangelist. While visiting Mineral Wells, he went to see it for himself and remarked that it was “truly an inspirational view.”

There is about as much information regarding the history of the Fat Man’s Reducer as there is a remnant of its existence. The 700 Step walkway is believed to have been built as a tourist attraction back in the early 1900s. It led to a park with an observation tower that offered a panoramic view of the city below.

“Back behind the Crazy Hotel, they had a walkway up the mountain for the tourists, which they called the Thousand Steps. People would sit around the hotel drinking [Mineral Wells] water and then head up the steps to get a little exercise. They’d get about halfway up and then come flying back down to the bathroom.” ~A.F. Weaver Jr. * from DMagazine

Today, what remains of the staircase is privately owned and not accessible to the public.

A- Bankhead Hwy (Broadway of America)

The Third Annual Convention of the Bankhead Highway Association met in Mineral Wells in April of 1919 where the Texas portion of the route was approved. It was the first transcontinental highway in the US and it allowed travelers to drive from the Nation’s Capital in Washington, D. C. all the way to San Diego, California.

L- The Grottoes on Lover’s Retreat

West of Mineral Wells in the town of Palo Pinto was another popular scenic spot known as Lover’s Retreat. It was once the location of the Old Settlers Reunions and other community and family gatherings.

The much-loved tourist spot featured a swinging bridge that spanned Eagle Creek, large rocks creating a cliff and grottoes or small caves, plenty of grassy areas for picnicking and the creek itself was great for swimming and canoeing.

One of two iconic signs in Mineral Wells, the “Crazy” sign being the other, the WELCOME sign that now greets visitors from the Welcome Mountain has an interesting history.

Originally placed on Mineral Wells’ East Mountain in 1922, the famous Welcome Sign was a gift from George Holmgreen of San Antonio Iron Works. It was the “largest noncommercial, electrically lit sign in the country” at the time.

Legend has it our WELCOME sign inspired the HOLLYWOOD sign in California. As the story goes, famous movie producer, D. W. Griffith, visited Mineral Wells and was quite impressed when he saw the sign. When he returned to LA, he and his partners started a land development project and named it Hollywood Land. They built a similar lighted sign that said, “Hollywood Land.” The word “Land” was later removed.

In 1972, our Welcome sign was moved from East Mountain to Bald Mountain, so it could be seen by visitors traveling into town from the east on U.S. 180. Bald Mountain was later renamed Welcome Mountain. The mountain is now covered in trees, so a name change was definitely a good idea.

Seems Lover’s Retreat was so popular that Teich thought it should get two features on the Greetings From Mineral Wells Card. But there’s only so much you can “say” about it, so we won’t write about it again here. Refer to “L: The Grottoes at Lover’s Retreat” above.

Donkey rides were very a popular tourist attraction in the early 1900’s. Not only was it great entertainment to ride a donkey up the mountain to the park above, but having a souvenir photo to capture the experience was a must.

One of the photographers had a photo garden with a log cabin up the trail a ways. At the end of the donkey trail, tourists could enjoy the Observation Tower and park at the top of the mountain. The park featured a large open-air dance hall, advertising benches, and hamburgers from a concession stand.

We couldn’t find the postcard image that appears in the “Greetings From Mineral Wells” postcard, but this photo certainly tells the story.

We’ve already talked about the Baker Hotel in the “N- Baker Hotel” section. But the pool… well, it has quite a prominent piece in the hotel’s history and definitely deserves its own mention in this post.

The original Baker Hotel design placed the building in the space that is now occupied by the swimming pool. After construction on the Baker had already begun, the hotel’s designer, Theodore Baker visited another hotel in California. That hotel had a swimming pool, so of course, our hotel must have one too…and it must be filled with our famous curative mineral waters. That meant the the hotel needed to be moved back to make room for the pool and a beautiful fountain. Cool fact…this pool was the first swimming pool to be built for a hotel in the state of Texas.

And don’t you love the slogan on the bottom left of the card? “For Recreation That Re-Creates”

Finding the original postcard of the “S” image came proved to be quite a task. The image shows the First Methodist Church in the background and a beautiful garden in the foreground. Here’s a hint…don’t search for “First Methodist Church.”  The subject of the original postcard is actually the Baker Hotel and those gardens are on the hotel’s property. In this post, we’re going to talk about the church.

The First United Methodist Church met under different names and in various buildings before they built the church that now stands at 301 NE 1st Street. The building shown in the postcard is the result of two expansions to a frame church built-in 1892. There was a second expansion in 1903. With it the church gained a two-story annex to provide Sunday School rooms, and a brick-veneer as shown in the postcard image.

After 42 years, the congregation decided to demolish it for a new building…the one that still stands today.

Did you know all the locations on the Greetings From Mineral Wells postcard?